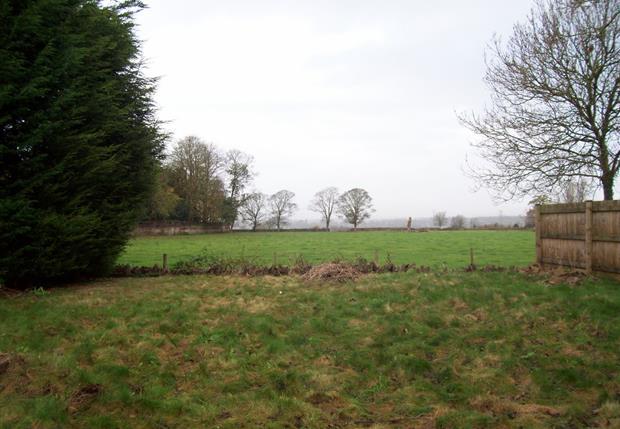 Summary
A detailed planning consent for a detached two-bedroom house of approximately 1000sq ft., the plans also allow for a garden, access and turning area and hard-standing for two parking spaces, bike store and refuse/recycling area. The plot has expansive views across open fields to the rear of the site and is in a desirable village location on the outskirts of Bristol.

The Site
This is a level and clear site of approximately 13 metres x 13 metres (1819sq ft). The site is screened from the road by a 10 ft. hedge and there are mature trees to one side of the plot. The other side of the plot is fenced away from a large detached house which is in keeping with the other properties on this side of the road.

The Area
Winterbourne is a large village on the outskirts of Bristol with a population of some 8500 people. Much of the village is on a hill and is surrounded by woodlands and fields. The Winterbourne Viaduct passes over the local nature reserve and large duck pond, whilst two notable buildings are the 12th century St. Michael’s Church and the 14th century tithe barn, Court Farm Barn. The village could arguably be a small town, having many amenities including 3 pubs, two supermarkets, a dentist, chemist, bakery, post office, library and bank. There are all-weather sports facilities at Winterbourne International Academy as well as a swimming pool and gym. The village has 4 schools including the independent Silverhill Preparatory School. The ‘Harry Potter’ author J. K. Rowling attended St. Michael’s Primary School in the village. The major shopping centre at Cribbs Causeway is 4 miles from the village, whilst Bristol Parkway railway station is just less than two miles from the plot. Bristol City Centre is 7 miles from the site.

Services
The site has access to all main services including gas. We advise potential purchasers’ to make their own enquires to clarify this prior to purchase.

Viewing
The site can be viewed on an open viewing basis, just walk onto the site from the pavement.
Registration allows you to receive detailed information about land matching your requirements.
Whilst every effort is made to ensure the accuracy of these details, it should be noted that the measurements are approximate only. Floorplans are for representation purposes only and prepared according to the RICS Code of Measuring Practice by our floorplan provider. Therefore, the layout of doors, windows and rooms are approximate and should be regarded as such by any prospective purchaser. Any internal photographs are intended as a guide only and it should not be assumed that any of the furniture/fittings are included in any sale. Where shown, details of lease, ground rent and service charge are provided by the vendor and their accuracy cannot be guaranteed, as the information may not have been verified and further checks should be made either through your solicitor/conveyance. Where appliances, including central heating, are mentioned, it cannot be assumed that they are in working order, as they have not been tested. Please also note that wiring, plumbing and drains have not been checked.