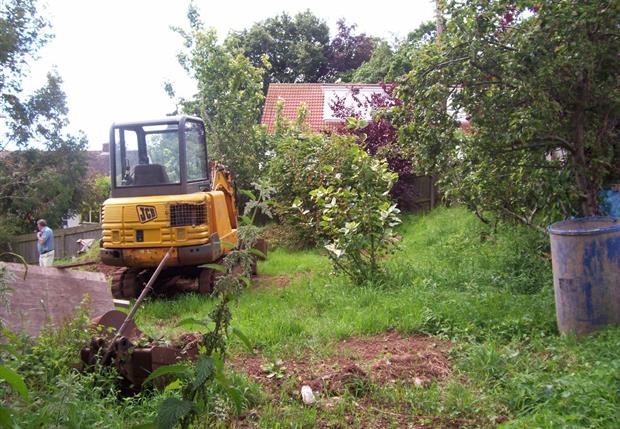 Summary
A single building plot with the benefit of a detailed planning consent for a detached 3xbedroom bungalow of approximately 1100sq ft. The plot is situated in a quiet cul-de-sac location within a desirable residential road, about a 10 minute walk to the town centre and in an elevated position. The bungalow will have a garden, patio area, off-road parking for two cars, turning head and private access.

The Site
The plot is set in mature gardens and is mainly level. The plot is approximately 3100sq ft., being 24 metres in depth and around 12 metres in width. The plot will require some earth to be moved.

The Area
Teignmouth sits on the north bank of the River Teign with a population of around 14000 residents. The town has been a fishing port since the 13th century and is also a popular tourist destination. The Shaldon Bridge was originally built in 1827, being completely rebuilt 100 years later. The town enjoys a temperate climate, with 50% less rainfall than Dartmoor and with a temperature some 3 to 4 degrees higher. The town has an attractive beach, harbour and pier as well as a cinema and theatre and a busy shopping area. The town has many primary schools as well as Teignmouth Community College, the school attended by the Rock Band ‘Muse.’ There is also Independent education at Trinity School (Teignmouth). Torquay is just 7 miles from Teignmouth, set along 22 miles of coastline with a very good shopping centre that includes Debenhams and Marks and Spencer and super-markets such as Sainsbury’s and Tesco.
Services
The site has access to all main services including gas. We would advise potential purchaser’s to make their own enquiries with regard to services prior to exchange of contracts.

Viewing
The site can be viewed only by prior appointment with The Land Bank Partnership.
Registration allows you to receive detailed information about land matching your requirements.
Whilst every effort is made to ensure the accuracy of these details, it should be noted that the measurements are approximate only. Floorplans are for representation purposes only and prepared according to the RICS Code of Measuring Practice by our floorplan provider. Therefore, the layout of doors, windows and rooms are approximate and should be regarded as such by any prospective purchaser. Any internal photographs are intended as a guide only and it should not be assumed that any of the furniture/fittings are included in any sale. Where shown, details of lease, ground rent and service charge are provided by the vendor and their accuracy cannot be guaranteed, as the information may not have been verified and further checks should be made either through your solicitor/conveyance. Where appliances, including central heating, are mentioned, it cannot be assumed that they are in working order, as they have not been tested. Please also note that wiring, plumbing and drains have not been checked.