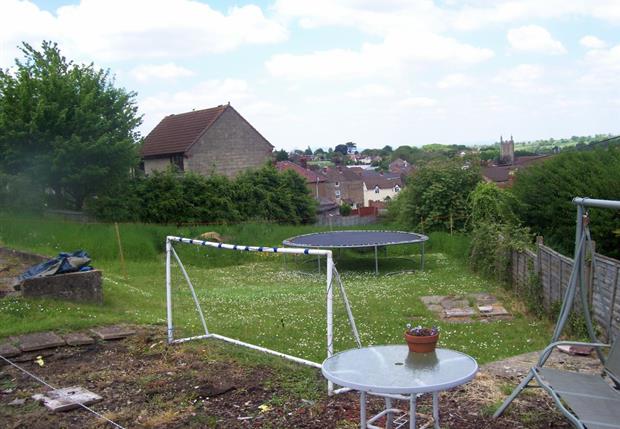 Summary
A detailed planning consent has been granted for a detached 2-bedroom dormer bungalow of approximately 750sq.ft to also allow for a garden and two on-site parking spaces. The bungalow will be in a quiet hillside location at the end of a cul-de-sac with views towards the church and countryside.

The Site
The site is mainly clear and is approximately 215sq.m (2314sq.ft) with a very gentle slope. There is some hard-standing to remove from the site but it is mainly grass and it is clear.

The Area
Dursley is a market town on the edge of the Cotswolds, with a population of around 3500 people. Stinchcombe Hill provides the backdrop to much of the town which is surrounded by woodland and countryside, whilst the Cotswold Way long distance trail passes through the town. Notable landmarks are the 13th century St. James the Great church and the 18th century market house which still plays host to monthly farmers markets. The town has an 18- hole golf course and a new Sainsbury supermarket, whilst secondary education is provided at Rednock School. Cam is the larger neighbouring village with a population of around 8500 people and consequently has many amenities including shops, post office, pubs and a new Tesco supermarket, all clustered loosely around St. Bartholemew’s church. The village has 3 primary schools. The village also has both a cricket club and football club. The largest employer in the area is Cam Mills, which has been creating cloth for tennis balls since Tudor times. Independent education is available at nearby Wycliffe College and The King’s School. This area is 11 miles from Stroud. Stroud lies in England’s largest ‘Area of Outstanding Natural Beauty’ in the South Cotswolds, surrounded by five valleys, with a population of around 100,000 people.

Services
The site has access to all main services including gas. We would advise potential purchasers to make their own enquires to clarify this prior to purchase.

Viewing
The site can be viewed only by appointment through The Land Bank Partnership.
Registration allows you to receive detailed information about land matching your requirements.
Whilst every effort is made to ensure the accuracy of these details, it should be noted that the measurements are approximate only. Floorplans are for representation purposes only and prepared according to the RICS Code of Measuring Practice by our floorplan provider. Therefore, the layout of doors, windows and rooms are approximate and should be regarded as such by any prospective purchaser. Any internal photographs are intended as a guide only and it should not be assumed that any of the furniture/fittings are included in any sale. Where shown, details of lease, ground rent and service charge are provided by the vendor and their accuracy cannot be guaranteed, as the information may not have been verified and further checks should be made either through your solicitor/conveyance. Where appliances, including central heating, are mentioned, it cannot be assumed that they are in working order, as they have not been tested. Please also note that wiring, plumbing and drains have not been checked.