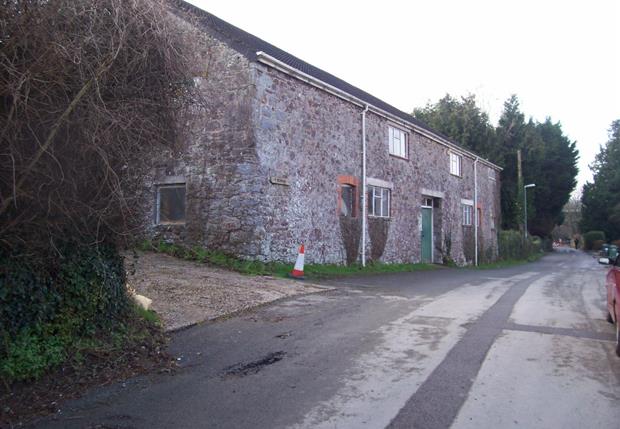 Summary
A detailed planning consent has been granted for the conversion of an existing and attractive workshop/barn into 3 x 3-bedroom houses of approximately 1400sq.ft each. The barn is in a quiet residential road and the plans allow for rear gardens and on-site parking for 6 cars.

The Site
The site is approximately 700sq.m just half a mile from the town centre. The plans seek to lower the existing first floor rather than increase the overall height of the building. The car-park area will require some digging out.

The Area
Buckfastleigh is a small market-town on the edge of Dartmoor National Park. The vintage steam locomotives pass alongside the River Dart on the South Devon Railway to Totnes. One mile to the north is Buckfast Abbey; endorsed by King Canute in 1018 it became a Cistercian Abbey in 1147 before lying in ruins after the dissolution of the monasteries. It was revived in the 19th century as a Benedictine Abbey. The town has local shops, a post office, supermarket and the renowned Riverford Organic Farm. Some 6 miles to the east is Totnes, a historic market town with many restaurants and cafes and a twice-weekly market. Notable land-marks are the Norman Totnes Castle built during the reign of William 1st and the spectacular Mediaeval Church of St Mary. Totnes even has its own currency, the Totnes Pound, exchanged in local shops and businesses. The railway station has direct trains to London and Plymouth whilst the town lies some 22 miles south of Exeter. The main secondary school is King Edward V1 Community College, whilst independent education is offered at St. Christopher’s and Park School.

Services
The site already has all main services and gas is available in the road. We would advise potential purchasers to make their own enquiries with regard to services prior to exchange of contracts.

Viewing
The site can be viewed only by appointment through The Land Bank Partnership.

Registration allows you to receive detailed information about land matching your requirements.
Whilst every effort is made to ensure the accuracy of these details, it should be noted that the measurements are approximate only. Floorplans are for representation purposes only and prepared according to the RICS Code of Measuring Practice by our floorplan provider. Therefore, the layout of doors, windows and rooms are approximate and should be regarded as such by any prospective purchaser. Any internal photographs are intended as a guide only and it should not be assumed that any of the furniture/fittings are included in any sale. Where shown, details of lease, ground rent and service charge are provided by the vendor and their accuracy cannot be guaranteed, as the information may not have been verified and further checks should be made either through your solicitor/conveyance. Where appliances, including central heating, are mentioned, it cannot be assumed that they are in working order, as they have not been tested. Please also note that wiring, plumbing and drains have not been checked.